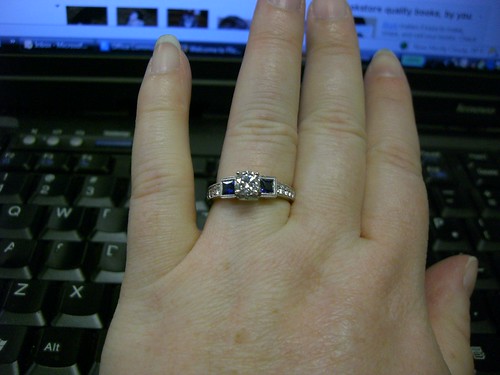 Kevin totally surprised me. First, he said he was going to make a payment on the ring, and perhaps James and I would like to go hang out somewhere else so James wouldn't be bored in the store. I found this slightly odd since James usually likes jewelry stores. But, I sort of just shrugged it off. Then, he was like "oh, I'll just run over there now, while James finishes his homework", and I was like "oh, okay, that makes sense".

While he was gone, James finished his homework, and asked if he could ride his bike. I was like "Yes, be back in an hour". Well, about 10 minutes later, he comes running in, saying "Gail, I found this outside, but I don't know what to do with it!" I turn around, and he has a box open, and its MY RING!

It turns out that the old downstairs tenants paid their part of the gas bill (600 dollars worth!), he got a rebate on an insurance deductible, and our newest gas bill was only 32 dollars! So he could pay it all off this week.

Next, I sewed Aimee a purse! She picked out the fabric and pattern at her local quilting shop. The pattern came from Slouchy Bags by Cindy Taylor Oats. The outside fabric I believe is one of Robert Kaufman's Asian designs, but its older, and I can't find it online. The inside came from Timeless Treasures, and is also older. I had a few false starts, but I'm really pleased with the results. 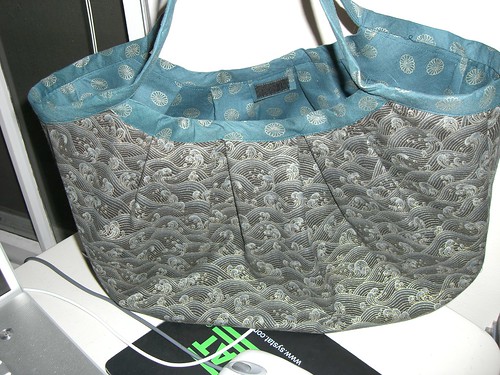 It was the most complicated thing I've made so far - it has an underlining, lots of interfacing, I had to do bias strips for the binding and the handles. However, it seems like in the sewing world, everyone is more than happy to write up tutorials and pictures and diagrams, for free! So it wasn't too hard to figure out.
Collapse